5 Minute Jesus: The cross is not a symbol of power

5 Minute Jesus: The cross is not
a symbol of power

This morning I happened to be reading a 4th Century Christian text, for a book I’m writing on the history of the church. It was from the Scholar-Bishop named Eusebius, who was writing shortly after the Emperor Constantine announced that he had become a Christian. It was a momentous event. And according to Constantine’s own testimony, just before a huge battle with his rival Maxentius, he saw a vision in the sky of a huge cross inscribed with the words “In hoc signo vinces” – in this sign conquer.

Constantine fought and won at the Battle of Milvian Bridge on October 28, 312, and henceforth decided to fashion his Standards – the banners the armies fought under – with a huge sign of the cross.

Just eight years before, Christians had been severely persecuted by Roman authorities. Churches were destroyed, Scriptures were burned. All Christians in high places were deposed and many were tortured and killed. Eusebius lived through all of that, and now in 312, the Emperor gets converted and Eusebius is happy to have a cross on the Roman Standards.

“The emperor constantly made use of this sign of salvation as a safeguard against every adverse and hostile power and commanded that others similar to it should be carried at the head of the armies.”

A people used to mockery and social exclusion and worse were now invited into the very centre of power. And perhaps most bizarrely, the Christian sign of humble self-sacrifice – a cross – was now a formal part, the very symbol, of the Roman war machine.

It is just so hard to get my head around, when I consider what Jesus had said about the cross – his cross – and its social implications. In Mark chapter 10, centuries before Eusebius, we read that James and John (the sons of Zebedee) came to Jesus:

“Teacher,” they said, “We want you to do for us whatever we ask.”

“What do you want me to do for you?” Jesus asked.

They replied, “Let one of us sit at your right and the other at your left in your glory.”

They’re obviously thinking that Jesus is a conquering Messiah, such as many were expecting in those days: a Messiah who would lift Israel above Rome and crush the enemies of God.

“You don’t know what you’re asking,” Jesus said. “And when the ten heard about this, they became indignant with James and John.”

This is almost comedic. The Apostles are indignant at the other two Apostles, but not because they’re disappointed in James and John for their lack of humility. No, they want the glory James and John had asked for. They’re thinking of religion as domination. And they were just annoyed that James and John got in there first.

This prompts one of the most precious theological and ethical statements you find in the Gospels:

“Jesus called them together and said, ‘You know that those who are regarded as rulers of the Gentiles, lorded over them and their high officials exercise authority over them. Not so with you. Instead, whoever wants to become great among you must be your servant. And whoever wants to be first, must be slave of all. For even the Son of Man [that’s Jesus himself] did not come to be served, but to serve and to give his life as a ransom for many.” (Mark 10:42:45)

There’s theology and ethics right alongside each other in this paragraph. The theology is Jesus’ mission. He came not to conquer, but to serve and die – to give his life as a ransom for many. He pays the price of salvation. But there’s social ethics built into this that has massive implications for the Church’s approach to political and military power.

There’s hardly a more obvious reality in the world than that the Caesars and his cronies subjugated those under them – fiscally as well as physically.

“You know that those who are regarded as rulers of the Gentiles,” Jesus said “lord it over them and their high officials exercise authority over them.” But his whole point is: “Not so with you.”

James and John and the others wanted first position in the kingdom. But Jesus says: No, those spots go to people shaped by the cross.

Christians did live that way through the first 300 years of the church. They’re brave resolve to suffer and serve is remarkable, and it’s everywhere in our ancient sources – both the Christian sources and the Roman ones. But those lines in Eusebius from the 4th Century that praise the cross on a Roman military Standard are a complete reversal of what Christ taught and did. And I find it so depressing.

Then again, there’s much in the same period I find inspiring. One of Eusebius’ contemporaries was a philosopher-teacher in the Academy at Nicomedia, near Constantinople. His name was Lactantius and he was a Christian who lost his job in the Great Persecution (if you had a job teaching in the Academy and you were a Christian, you couldn’t teach). He survived the persecution and then wrote an amazing treatise for his pagan intellectual buddies called The Divine Institutes in which he writes:

“There is no need for violence and brutality. Worship cannot be forced. It is something to be achieved by talk rather than blows. Religion must be defended, not by killing but by dying; not by violence, but by endurance; not by sin, but by faith.”

Christian history is mixed. There are some who have thought that power, and even violence, was an acceptable way to promote the truth. There’s no denying that. But there are others who followed what Jesus said and did. Whoever wants to be great among you must be your servant.

5 Minute Jesus: The cross is not a symbol of power 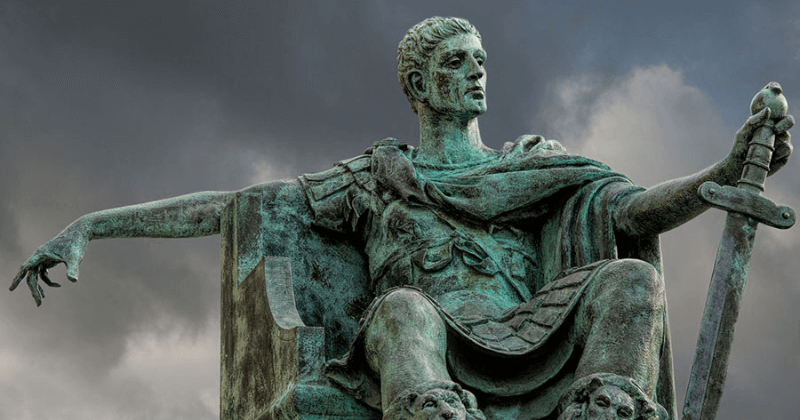