Thousands of scraps of paper that have been buried in the sands of Egypt for over two millennia are now stored in museums and universities all around the world. Dr Brendan Haug enters “the vault” in the University of Michigan’s papyrology collection.

These little scraps – often no bigger than your mobile phone – provide a powerful window into ancient life – its troubles, its personalities and its ethics.

One of the most important of these pieces of paper – or papyrus – is 86 pages of the letters of the Apostle Paul, the author of much of the New Testament of the Christian Bible.

These 86 pages are known as P.46, and they are among the most precious artefacts of ancient history.

In our first episode, we got to play with them.

P46: The end of Romans and beginning of Hebrews.

We speak with Dr Brendan Haug, from the University of Michigan’s Papyrology department, and the home of some of the letters of Paul known as P46. 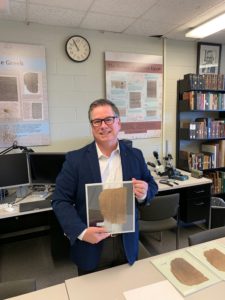 John Dickson is rather excited about his visit to see P46.

One of the biggest myths about the Bible is that it’s been changed throughout history, like a kind of Chinese whispers. What we see in our Bibles today is nothing like the original.

Artefacts like P46 give great insight into how parts of the Bible were copied. With P46 being dated somewhere around the third century, we can also compare it to other later copies – and our Bibles today – to see what exactly is different.

“Here’s the cool thing about New Testament studies: we have so many copies! We’ve just been talking about P.46 in this episode, the earliest. But we have hundreds of manuscripts, fragments and huge portions from different periods of Roman history and different parts of the empire, and we can line them up all together and work out where the variations have taken place.” — John Dickson, episode 1.

Get to know our guest 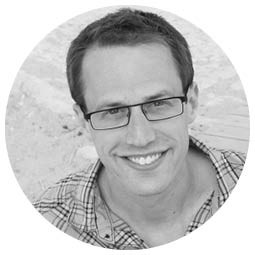 Dr Brendan Haug is the archivist at the University of Michigan’s Papyrology Collection and Assistant Professor in the Department of Classical Studies. He is particularly interested in papyrology and the history of Graeco-Roman Egypt, Egyptology and Egypt in the European colonial period.

About the University of Michigan’s Papyrology Collection The Papyrology Collection at UM houses an estimated 18,000 pieces of papyrus. Just this year, the collection was valued at approximately $100 million. It’s the largest collection of papyri in North America and the 5th largest in the world.