To suggest Jesus never told anyone what to believe in is not only historically wrong, it misses the essential connection between what we believe and how we treat others, writes John Dickson.

At the Sydney Writers’ Festival yesterday, the much loved social commentator and author of The Good Life and Beyond Belief Hugh Mackay opined about the teacher at the root of Western ethics: “Jesus never told anyone what to believe in. He only spoke about how to treat each other.”

My colleagues in the room – experts on this stuff – raised an eyebrow. The festival social media department thought the remark worthy of an immediate verbatim tweet.

Who knows whether Mackay’s words were a throwaway line or studied aphorism. But they are inaccurate in the extreme, both as a religious statement and as a historical one. Mackay may come from the modern school of thought that says that religion is not really a proper field of study. Anyone is therefore allowed a firm view without reference to “experts”. I mean, how can someone be an expert in something that doesn’t exist? And so on.

But forget religion. What about history? What do our first-century texts say Jesus said? I’ll spare you the long list, but what struck me once I gave this five minutes’ thought is the way almost all of the paradigmatic statements in the Gospels urge beliefs as the logical basis of ethics.

The Sermon on the Mount in Matthew’s Gospel opens with the words, “Blessed are the poor in spirit for theirs is the kingdom of heaven.” The most famous sermon of Jesus, in other words, begins with a reminder that he is not just looking for moral riches but a humble recognition of our moral poverty as the key that unlocks the door to God’s kingdom. There’s a bit of belief in there.

Or consider the opening words of Jesus in Mark’s Gospel: “The kingdom of God is near. Repent and believe the gospel”. There’s that pesky “kingdom” stuff again, and a call to believe it all – as “gospel”.

Luke’s Gospel is often thought to contain the most “ethical Jesus”, with loads and loads of material about caring for the poor, being a Good Samaritan, and all that. The opening manifesto of Jesus in Luke declares, “The Spirit of the Lord is on me, because he has anointed me to proclaim good news to the poor. He has sent me to proclaim freedom for the prisoners … to proclaim the year of the Lord’s favour.” As so often in the Gospels, God’s grace and favour are the drivers of the grace and favour we are meant to show others.

What about the fourth Gospel? John has Jesus sum up the work of God in this way: Jesus says, “The work of God is this: to believe in the one he has sent.”

Of course, a sceptic like Hugh Mackay might reply that these key passages represent the opinions of the Gospel writers not Jesus. Jesus, he might suggest, is authentically heard only in the humanitarian stuff about “loving enemies” and “turning the other cheek”. But maybe it’s the other way around. Perhaps the real Jesus only ever banged on about believing theological stuff, and it was the Gospel writers who invented the ethical material Mackay prefers. That’s the point: Mackay is just picking and choosing.

In truth, neither caricature is likely. Everywhere you look, Jesus appears to have endorsed the old-fashioned idea which Mackay wants us to abandon: namely, that what you believe about ultimate things impacts how you think you should treat others.

Two further examples bear this out clearly. When asked by an expert in the Jewish tradition, “Which is the greatest commandment?” Jesus replied that there were actually two great commands: “Love the Lord your God with all your heart. This is the first and great commandment. And a second is like it: love your neighbour as yourself.” Like it or not, Jesus probably thought the religious hypocrite was in exactly the same position as the moral agnostic. The former cares for God but ignores people; the latter cares for people but ignores the source of all reality. Jesus would have condemned both.

And when Jesus himself summarised all his beautiful sayings about “love your enemies”, “do good to those who hate you”, and “turn the other cheek”, he concluded the speech with, “Be merciful, just as your Father is merciful.” Here we find the inner logic of all that Jesus taught about ethics: it is precisely because mercy is at the heart of God that it is also the central ethical principle of the universe.

I am almost tempted to say that Jesus never taught people “how to treat each other” without grounding it in stuff we are “meant to believe” about ultimate things, including God and his kingdom.

Read charitably, Hugh Mackay is trying to open up an important discussion about the role of “beliefs” – or fundamental convictions – in shaping ethics. Jesus is a bad example to use, but I agree it’s a vital public conversation to have.

Personally, I reckon Mackay’s godly-but-godless-ethic is really just a relic of the Judeo-Christian culture in which he, like most of us, was raised. It seems obvious to him that we should be humble, love our enemies, and show compassion to the destitute. But, historically, these things were connected with religious ideas in the West about the inestimable value of human beings made in God’s image, the love and mercy of God for all, and so on. These particular morals – humility, love, etc – played no role in the ethics of Greece and Rome for the simple reason that Greeks and Romans did not believe that everyone was made in God’s image or that God loved everyone the same. Their different beliefs led to different moral emphases.

I would love to see a genuine debate about whether one can logically justify an ethic of love, humility, and compassion – things Mackay admires so much – without appealing to the “kingdom of heaven” Jesus spoke so much about. I don’t think we can. I think it’s only a matter of time before a society which rejects the love of God realises that loving everyone, including enemies, is merely a cultural-historical habit rather than a logical match between fundamental realities and human ethics. I could be wrong, but it’s a debate that needs to be had. And if we’re going to have it, important public intellectuals like Hugh Mackay need to do better than give us quotable memes like “Jesus never told anyone what to believe in. He only spoke about how to treat each other.”

Dr John Dickson is a historian and author, and is the Founding Director of the Centre for Public Christianity. 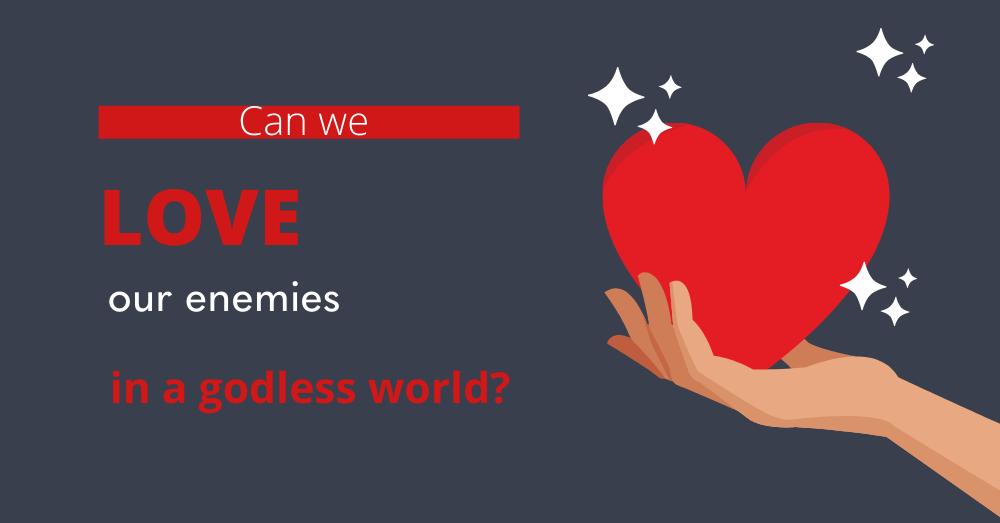