Was there ever a real Star of Bethlehem?

Was there ever a real Star of Bethlehem?

On our typical Christmas card, the star is usually shining bright and large right over the stable where Jesus lay. The Christmas star – or the star of Bethlehem as it’s known – is one of the most recognisable symbols of Christmas.

But a star hanging over a particular place is not something you see everyday. In fact, many would say it is not something that was seen on the night Jesus was born. It’s myth, they argue. But is it?

The story is only told in Matthew’s Gospel, so you’ll find that many historians just dismiss the account as a late accumulation to amp the whole thing up.

After Jesus was born in Bethlehem in Judea, during the time of King Herod, Magi from the east came to Jerusalem and asked, “Where is the one who has been born king of the Jews? We saw his star when it rose and have come to worship him.”

When King Herod heard this he was disturbed, and all Jerusalem with him. When he had called together all the people’s chief priests and teachers of the law, he asked them where the Messiah was to be born. “In Bethlehem in Judea,” they replied, “for this is what the prophet has written:

“‘But you, Bethlehem, in the land of Judah,
are by no means least among the rulers of Judah;
for out of you will come a ruler
who will shepherd my people Israel.’”

Then Herod called the Magi secretly and found out from them the exact time the star had appeared. He sent them to Bethlehem and said, “Go and search carefully for the child. As soon as you find him, report to me, so that I too may go and worship him.”

After they had heard the king, they went on their way, and the star they had seen when it rose went ahead of them until it stopped over the place where the child was. When they saw the star, they were overjoyed. On coming to the house, they saw the child with his mother Mary, and they bowed down and worshiped him. Then they opened their treasures and presented him with gifts of gold, frankincense and myrrh.

Christians happily trust the gospels in this account. They have judged the gospels to be trustworthy, and this is part of one such gospel. But can we say more, historically speaking? Not much, but a bit.

Raymond E. Brown, a famous NT scholar not known for believing everything he reads in a Gospel, points out (in his book The Birth of the Messiah, p172-173), that there was a very rare conjunction of Jupiter and Saturn in 7 BC—that appeared three times in the one year—with Mars passing through in early 6 BC. It would be unnecessarily speculative to identify this conjunction with Matthew’s ‘star’, as Brown is quick to insist.

“We can trace the night sky backwards in time quite nicely – it’s a fairly simple physics system.”

But Brown also notes that Jupiter was often associated in pagan thinking – the thinking of the wise men, the magi – with a new world ruler. So it is not outside the realm of possibility that eastern courtiers would have interpreted this phenomenon as a sign of the birth of a king. This provides a plausible context for Matthew 2. Historically, we probably can’t say more than that. Raymond Brown certainly doesn’t.

According to astronomers, we’ll be able to this “Christmas Star” again in 2020. A planetary alignment that hasn’t been seen for 800 years will occur again on December 21.

Jupiter and Saturn will align at this time, and they will be so close to earth and aligned in orbit, that they’ll appear to create an intensely bright ‘star’.

The planets aligning so close to earth is extremely rare. The last time they aligned so close to us was in the middle ages, astronomer Patrick Hartigan from Rice University told Forbes. March 4, 1226 to be exact.

Dr Luke Barnes is an astrophysicist who lectures on astronomy and cosmology at Western Sydney University. He told the Undeceptions Podcast that there are three main theories grounded in astrophysics about the Star of Bethlehem.

“We can trace the night sky backwards in time quite nicely – it’s a fairly simple physics system,” said Dr Barnes.

“We can go back and work out that there was a triple conjunction of Jupiter and Saturn in about 7BC. Every now and then, Jupiter and Saturn will look like they’re in a similar place in the night sky – that’s a conjunction. If that happens at the right time of year, not only will they come together, they’ll actually come together three times over the course of a couple of months.”

That would explain why the Magi saw the star a few times as they headed towards Jesus.

When there’s talk of a ‘new star’, Dr Barnes says has first thing an astronomer is going to think about is a Nova: a nuclear explosion on the surface of an old star, or a supernova “which is a massive star totally blowing up”.

“If that happens, it would be very bright. It’s not something predictable, but it is something that the ancients knew about. It would be an amazing, big thing.

“The thing with a supernova is we can work out from looking at their remnant, how long ago they blew up. So we know that there was a Supernova in 1054. And we have both historical evidence for that and when we do the astrophysics and wind the clock back, we can see it. But there are none that land us in 6BC or 5BC. That’s a problem. Though maybe we just haven’t found it yet.”

Dr Barnes’ favourite theory is that the Star of Bethlehem is actually a comet.

“Comets were sometimes called stars in the ancient world. ‘Star’ was a more general term meaning something bright in the night sky. Josephus and Pliny both called comets, stars. They are more often a bad omen, but sometimes they can be a good omen.”

Dr Barnes says there is a connection to Numbers 24:17, which says “I see him, but not now; I behold him, but not near. A star will come out of Jacob; a scepter will rise out of Israel.”

“The idea of a star ‘standing over Bethlehem’ would, if the tail of the comet was pointing upwards and depending on where you are, look like a great big pointer to a particular place.

“[A comet] is the closest thing we have to some sort of ‘standing over’ star.”

Looking through the astronomy records, Barnes says that Hailey’s Comet was around but in about 12 BC, “so that’s a bit too early”.

“There’s a comet recorded by the Chinese in about 5BC. Colin Humphries – a material scientist from Cambridge – thinks that’s the one. But those records aren’t quite complete, so there’s a bit of debate about that.”

“It’s a great big ‘we’re not totally sure’ from astronomers,” says Dr Barnes.

“But there’s some interesting theories. The great German astronomer Johannes Kepler was trying to work this out 400 years ago! And there’s still plenty of interest in it.” 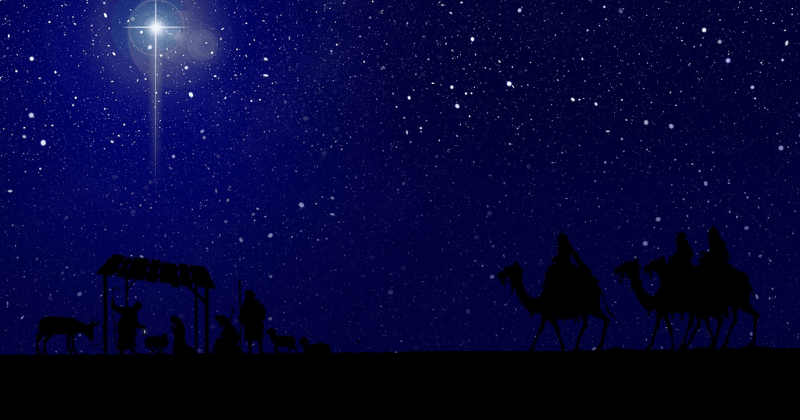