Two things you really should know about the Crusades

Two things you really should know
about the Crusades

When popular international ministry Campus Crusade for Christ changed its name to Cru in 2011, one of the reasons cited by then-Vice President of the US arm, Steve Sellers, was that the word ‘crusade’ had “developed an increasingly negative connotation that seems warlike and gives an impression of forcing Christianity on people.”

“We believe Jesus is the most attractive person in history,” said Sellers at the time. “So we don’t need to force him on people.”

Sellers was certainly on to something. Thomas Asbridge, a medieval historian and director of the Centre for the Study of Islam and the West once told the New York Times that “any use of the word ‘crusade’ has to be made with great caution. “It is the most highly charged word you can use in the context of the Middle East,” he said.

But how much do you actually know about the Crusades? Christopher Tyerman, a well-known authority on the Crusades from Oxford University says, “most of what passes in public as knowledge of the Crusades is either misleading or false.”

It is difficult to read the primary sources of the Crusades without being confronted by the strong religious motivations and aims expressed.

Here are just two things to start off with — two things it is important to know about these ‘Holy Wars’ of the 11th Century.

1. The Crusades were religiously motivated

“It is tempting to hide behind alternative explanations sometimes given [for the Crusades],” writes John Dickson in his book ‘Bullies and Saints’. Some of those explanations include:

Yet, says Dickson, it is difficult to read the primary sources of the Crusades without being confronted by the strong religious motivations and aims expressed.

Pope Urban II was the instigator of the First Crusade, and whatever his political ambitions, it was his theology that undergirded his thinking. It’s complicated, and too many simplistic explanations of the Crusades exist already, but Urban was essentially looking for a grand moment of repentance and unity for the Church so as to experience the renewing grace of God. He was looking to recover the purity of the church of earliest times. So when Byzantine Christian emperor Alexius I Comnenus begged for assistance from the West to ward off the looming Islamic forces that had captured much of the old Byzantine empire, Urban saw his moment.

In letters of Urban’s from this period (his sermon announcing the First Crusade has been lost), Urban writes, “whoever for devotion alone, not to gain honour or money, goes to Jerusalem to liberate the Church of God can substitute this journey for all penance.”

Urban wrote of how he “imposed on them [the Crusaders] the obligation to undertake such a military enterprise for the remission of all their sins.”

The Crusaders each received a piece of cloth in the shape of a cross, which was sowed onto their garments as a sign that they were obeying the words of Christ himself: “whoever wants to be my disciple must deny themselves and take up their cross and follow me.” While this interpretation of Jesus’ words make modern readers bristle, it was the key interpretation of in France in the 11th Century: all able-bodied Christian men should bear the cross of fighting against the enemies of Christ.

“The very word ‘Crusade’ comes from the Latin crux or ‘cross’, referring to the ceremony of taking up the sacred emblem,” writes John Dickson.

2. The Crusuades were a failure

“Popular imaginings about this period sometimes picture an almighty medieval Church terrorising the defenceless Muslims of Turkey, Syria, Palestine, and Egypt, and bringing them into brutal subjugation,” writes John Dickson. “In fact, apart from the surprising (and brutal) victory of the First Crusade in July 1099, crusaders were the losers.”

The Crusaders held on to Jerusalem (and little else) between 1099 and 1187, and then again for just 15 years between 1229 and 1244, but beyond that, the central goal of the eastern crusades never materialised.

“The truth is: Islamic forces won. Jerusalem, the Dome of the Rock, and the great Al Aqsa Mosque have been in safe Muslim hands—apart from the brief periods mentioned—from the 700s, right through to modern times. And the only event to interrupt regular prayers in the Al Aqsa Mosque since the 11th century was, as the New York Times reported, COVID-19: “Now, the coronavirus pandemic has done what the intervening centuries [and all those Crusades!] had not: largely emptying the often crowded and chaotic spaces of Islam’s third holiest site,” writes Dickson.

Dickson argues that not only were the Crusades ineffectual, their legacy was also equally minimal. “Most major wars in history leave an indelible mark on the winners and the losers. Resources change hands, ideologies are promoted or quashed, and new borders are drawn up.” But not much of this happened at all as an outcome of the Crusades.

Perhaps the real legacy of the Crusades is as a symbol of the violent “Dark Ages” and the Church’s all-too-human capacity for dogma, hatred and violence towards enemies.

“Admitting this reality should be instinctive for genuine Christians,” argues Dickson. 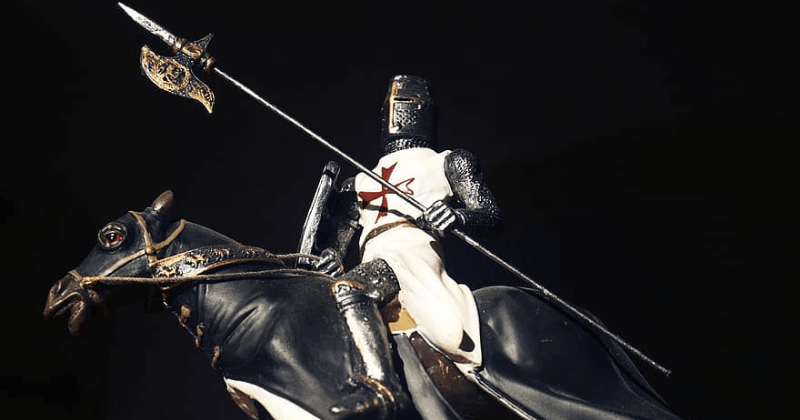