There’s an extraordinary role for women in Christianity

There’s an extraordinary role for women in Christianity

The witness and proclamation of women is integral to the historic claims of Jesus, his incarnation, atonement and resurrection, says Dr Amy Orr-Ewing, joint director of the Oxford Centre for Christian Apologetics.

As one of Christianity’s great ‘persuaders’, Orr-Ewing says the role of women in Christianity is unlike any other worldview, including secularism.

“It is a core distinctive of the Christian faith that women have a voice,” she says.

How do we know that Jesus is ‘God with us’, Emmanuel?

“The primary witness to that is Mary,” says Orr-Ewing. “She’s the first witness of the incarnation, a teenage girl who understands the Virgin birth in a way that none of us really can.”

How do we know that Jesus was crucified?

“The primary witnesses to the details of the crucifixion are women. The gospel accounts tell us that John was there, but the other disciples had deserted Jesus. It’s the women who are standing at the foot of the cross. We’re led to believe that the details of the account are primarily witnessed by women.”

How do we know that Jesus rose from the dead?

“Again, women were first at the empty tomb,” says Orr-Ewing.

History has shown that the Church has a patchy record on how it has treated women. And in the era of #Metoo, where men’s behaviour towards women is under a microscope, the church has not been exempt. The movement that has swept the world has led to the downfall of several pastors and prominent male Christians, and the faith itself has come under renewed criticism for patriarchy and misogyny.

Orr-Ewing says she can at times feel like a bit of an oddity – being one of the only high profile female ‘apologists’ of the Christian faith – but she is “finding her voice” in the conversation with a message that shows “Jesus’ extraordinary affirmation of women”.

“I think we have something really breathtaking and wonderful to say to culture today.”

In her 2017  talk titled Is Christianity bad news for women?, Amy outlined that message: that at Christianity’s foundations “every human being bears the divine image and thus it matters how people treat other people.”

“This worldview tells us that not only does it matter, but that we will be held to account for how we have lived,” she said. 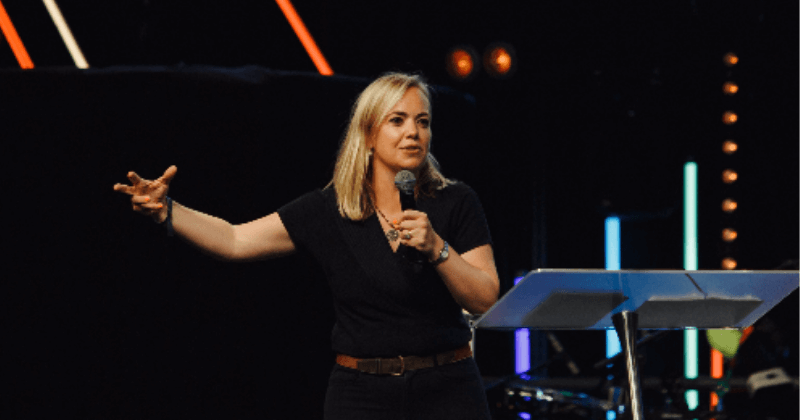