‘Away in a manger’: was Jesus really born in a stable?

'Away in a manger': was Jesus really
born in a stable?

Have you invested in an historically unsound nativity scene?

As tens of thousands of Australians prepare to decant their decorations for another festive season, historian John Dickson raises a question over the place of the manger in our Christmas ornaments.

Every nativity scene has one – the baby Jesus, usually lying on a bed of hay, couched in small wooden food trough.

But how accurate is the idea that Jesus was laid to rest in an animal’s feedbox?

Dickson says the problems start with our idea of the “inn” in Bethlehem that Mary and Joseph arrived at that first Christmas Eve.

“It could mean the trough for food, but more likely it just means the area where you put your animals.”

“The word ‘inn’ is katalouma in Greek and our knowledge of Greek usage says it can either mean an inn, like a guest house, or the guest room in someone’s actual house,” he says.

Dickson says it’s more likely Luke’s account of the birth of Jesus points to Mary and Joseph going to stay with relatives in Bethlehem, but that the crowding due to the census meant they couldn’t go into a normal bedroom, so they stayed in another part of the house.

And what does that mean for the manger?

“We only use it at Christmas time, and you could be forgiven for thinking it’s the special word for ‘the bed reserved for the son of God,” he jokes.

Historians are well aware, though, that the Greek word translated as “manger” is much broader in meaning than most people realise.

“It could mean the trough for food, but more likely it just means the area where you put your animals.”

Distraught Christmas decorators might be asking at this point what animals are doing in that ‘other part of the house’ Mary and Joseph ended up in, but Dickson says it’s a really first-world question.

Having animals in the house may sound weird to us, but it would have been par for the course for first century Palestinians.

“To ancient people it’s no weirder than letting your dog sleep in your house,” Dickson says.

Even the idea of “house” is up for dispute for ancient historians bent on re-drawing our picture of Christmas.

Bethlehem was a tiny village in Gospel times, probably containing only a few hundred people.

Dickson says its housing was supplemented by a significant number of caves, some of which he entered on documentary trips to Israel.

“Some houses used excellent caves [and] the ‘manger’ might just have been one end of the cave normally used for animals.”

All up, this means that our traditional Christmas decorations need more caves, less mangers and a baby Jesus asleep maybe on a pile of hay, rather than in a crafted wooden box.

He points out that Luke’s account used fewer than 400 words to recount the entire birth of Jesus, and Matthew uses even less.

Which goes to show, he says, that we could all benefit from a closer reading of the gospel story this Christmas.

“Pick up a Gospel this Christmas,” Dickson says.

“You may find lots of surprising stuff – some stuff missing, and some stuff there you never imagined.”

This particular revelation is featured in episode 12 of the Undeceptions podcast, titled First Noel. This episode tackles a range of myths that have grown up around the Christmas story and reveals what historians can say for sure about the birth of Jesus. 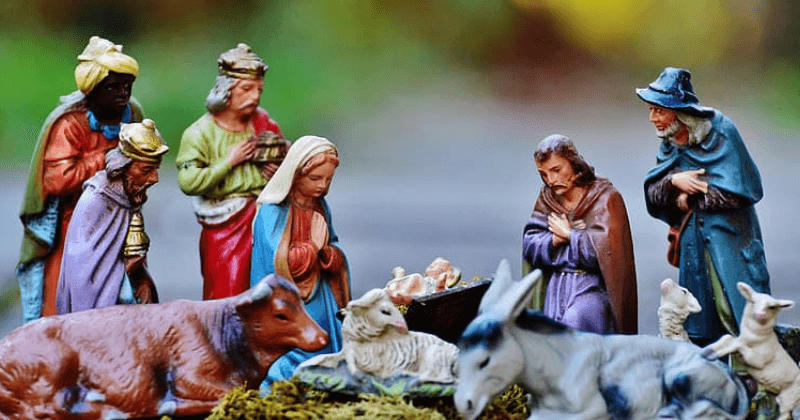