The Exodus is such a big deal in the Old Testament that many aspects of the New Testament and the life of Jesus can only really be understood in the light of the story of Israel rescued from that Egyptian slavery and brought into the Promised Land.

For one thing the whole movement from sin to salvation, so central to Christianity, is frequently stated in terms of deliverance from slavery to freedom, reminiscent of the Exodus story. And in one place the Apostle Paul says that this happened because of a new Passover. Remember that at the heart of the Exodus story is the weird instruction that Israelite homes in Egypt were to kill and eat a lamb and place its blood on their doorposts. God’s judgement fell on Egypt but passed over the Jewish homes.

Reflecting on this centuries later the Apostle Paul says, in 1 Corinthians 5, “for Christ our Passover Lamb has been sacrificed”. And of course historically speaking the arrest and crucifixion did occur during the Jerusalem Passover festival. The so called ‘Last Supper’ was in fact a Jewish Passover meal. Recalling the sacrificed lamb and blood on the doorposts in the original Exodus, Jesus at his last supper in Luke 22 says:

“I have eagerly desired to eat this Passover with you before I suffer.” He took bread and said, “this is my body given for you.” And he took the cup saying, “this cup is the new covenant in my blood, which is poured out for you.” [abridged Luke 22:15-20]

There are some subtler, nerdier elements of the Exodus story in the story of Jesus. Rikki Watts is regarded as one of the world’s foremost scholars of the gospel of Mark. His doctoral thesis back in the 1990s at Cambridge was published as Isaiah’s new Exodus in Mark (which can be purchased here). Rikki shows how chapter after chapter in Mark’s gospel presents the events of Jesus, from his baptism in the Jordan to his death and resurrection, as a recapitulation of the Exodus and thus a fulfillment of the first-century Jewish longing that God would bring about a new exodus for His people.

There are hints of the same thing in the other gospels, after all the motif must go back to Jesus himself. For example, in Matthew’s gospel there is this strong subtheme running throughout that Jesus is in some sense reenacting the whole story of Israel. But he does so in a way that succeeds where Israel failed, and so he invites his Jewish people and all of us into this new sequel (more detail can be found in John’s book A Doubter’s Guide to Jesus).

Early in Matthew’s gospel, in the Christmas story, Jesus’ family avoided the wrath of King Herod by fleeing to Egypt. Now what’s striking is that the infant Jesus’ return from Egypt back to the land Israel is described by Matthew as the fulfillment of an Old Testament passage that recalls how God rescued the nation of Israel centuries earlier from the land of Egypt, and then brought them into the promised land. Here’s how Matthew puts it in chapter 2:

So [Joseph] got up, took the child and his mother during the night and left for Egypt, where he stayed until the death of Herod. And so was fulfilled what the Lord had said through the prophet: “Out of Egypt I called my son.” [Matthew 2:14-15]

The prophetic words quoted by Matthew, “Out of Egypt I called my son”, come from the Old Testament book of Hosea chapter 11. Everyone in Matthew’s readership knew that this statement originally referred to the liberation of Israel from Egyptian slavery  centuries earlier. In context the Hosea passage reads:

Hosea writing in the eighth century BC, five centuries after the Exodus, is lamenting the fact that although God had rescued Israel from Egyptian slavery the nation repaid God by refusing to follow His ways. This happened pretty much straight away. No sooner had they left Egypt and received the ten commandments, than they invented ways of breaking those commandments during the forty years of desert wanderings.

Matthew takes Hosea’s statement about ancient Israel, God’s national son, and applies it to Jesus, God’s actual son. Jesus’ leaving Egypt and coming back to Israel is in someway a fulfillment of Israel leaving Egypt and coming into the promised land. Attentive first century readers would have begun to wonder in what way Jesus mirrors ancient Israel. In particular, they might have wondered how this new son, called out of Egypt, might succeed where Israel had failed.

If this were a 20 minute Jesus rather than a 5 minute I’d point out that that’s the meaning of another strange passage in Matthew. A few chapters later Jesus spends forty days in the desert, a kind of reenactment of Israel’s forty years in the wilderness. Facing the very same temptations in his wilderness wanderings that Israel did in their forty years in the desert. Except he does so successfully, Jesus prevails where Israel had failed.

This is perhaps not the most touchy feely theme in the gospels, but it’s an important one. It’s one that underlines how central the Exodus is. According to the New Testament, according to Jesus himself, the Messiah successfully reenacts, gathers up, the whole story of Israel, and so he becomes the means of salvation for Israel and the world.

Through his life, teachings, death, and resurrection, a divine sequel is being written, and we get to be part of that new story. We get to experience our own Exodus from slavery to freedom, from death to eternal life. 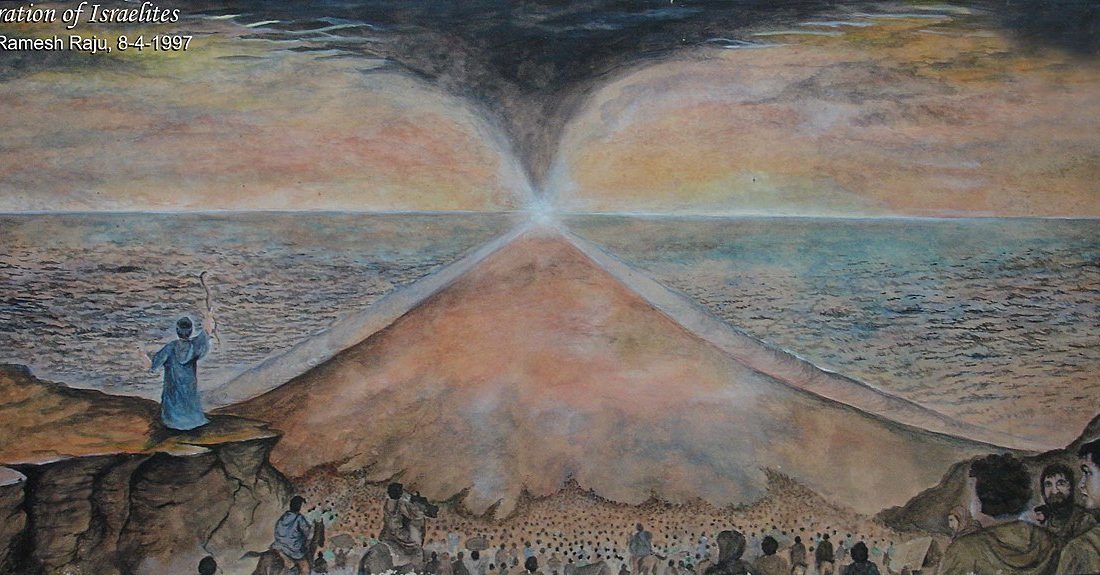